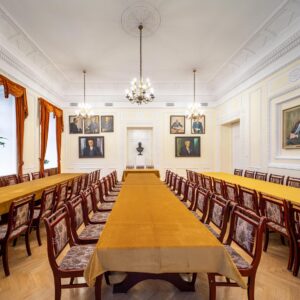 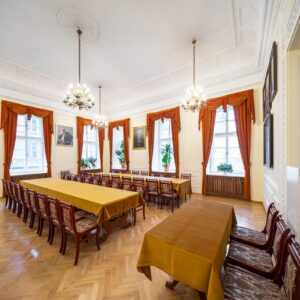 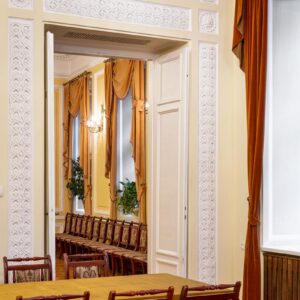 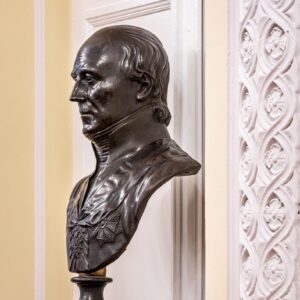 The Stanisław Staszic Hall is located on the second floor in the north-western corner of the palace. The room retains its old representative interior; yet, it is fitted with modern multimedia appliances. The arrangement of tables blends two types of solutions; the “board” setting and the presidium table, thus facilitating arrangement of official meetings with groups of discussants, as well as minor conferences. The hall has a total of 60 seats and a direct, internal access to the adjacent Hugo Kołłątaj Hall. The interior design is reminiscent of the Corazzian style; its character is best conveyed by the colonnade in the second-floor lobby and in the two main conference rooms.
In the hall, there is a gallery of paintings depicting the presidents of the Polish Academy of Sciences and the Warsaw Scientific Society. The window view looks towards Krakowskie Przedmieście, straight onto the Church of the Holy Cross and onto Nowy Świat Street.

There was a complex of libraries of the Society in the 19th-century palace. The library of Polish books was interconnected with the other two by a corridor, which, much like the offices, was turned into an exhibition space, displaying mineralogical and natural history objects in enclosed in cabinets and showcases. This arrangement was then changed during successive architectural transformations. As part of the palace restoration following the damage wrought by World War II, Piotr Biegański defined the room layout that has been preserved to this day.

Naturally, the name Stanisław Staszic Hall refers to the second president of the Warsaw Society of the Friends of Learning. This type of name commemorates a representative of the Age of Enlightenment, and one of the most eminent personalities of Polish culture. This association of the significance of the library as a reservoir of national culture with the humanist ideals underlines that the humanist reflection, so adhered to by Staszic, was the keystone of the far-reaching national economic growth programme. This is one of the many initiatives pursued within the palace walls, embodied both in the physical domain (e.g. library arrangement) and in the conceptual dimension (activities related to language and literature as initiatives shaping ideas and the linguistic image of the world at the community level). On this front, work continues by efforts of humanist-profile scientific societies and institutes of the Polish Academy of Sciences with a humanist profile, while the valuable book collections of the libraries of PAS institutes are frequently considered one-of-a-kind resources on the European scale.