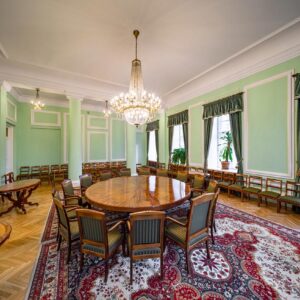 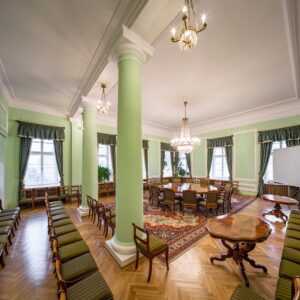 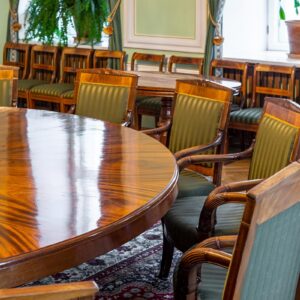 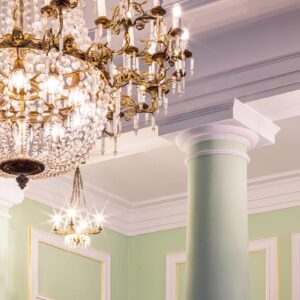 In the north-eastern corner of the building, on the second floor, lies the Round Table Hall. In its central part, there is an oval table for fifteen participants. The table can also become a presidium table, opposite the theatre-setting audience seats. The room’s size and décor render it the perfect setting for low-key events, ceremonies, and panel discussions. In keeping with the room genesis, the round table sets up the right conditions for discussions and deliberations to engage representatives of varying institutions or currents of thought.

Windows facing east offer a view of the Arnold Szyfman Polish Theatre. The Hall is interconnected with the Hall of Mirrors by a passage that can be opened for the purposes of events held in both halls concurrently. Moreover, events may be organized in sub-groups, and the sessions taking place in the adjacent room may be transmitted to the other one. The hall-adjacent space in the lobby is suited for use as a foyer with a buffet lounge. The hall offers a place for setting up the conference secretariat, too.

The Round Table Hall acquired its neoclassical appearance as a result of stuccowork and introduction of slender columns referring to the original design of the palace by Antonio Corazzi. The post-war reconstruction of the palace, supervised by Piotr Biegański in the 1940s, was accompanied by a decision to preserve the colonnade in the Ionic order. In the nineteenth-century palace, the area of the present Round Table Hall and a fragment of space adjacent to it was home to a complex of rooms (Dąbrowski Hall with an armory) for the display of the collection bequeathed by General Jan Henryk Dąbrowski to the Warsaw Society of the Friends of Learning. The confiscated collection was taken away to Russia after the Society had been dissolved, and architectural alterations changed the layout of the interior. The present shape was decided during the post-war reconstruction.

The name Round Table Hall was attributed to this room after the year 1989, and relates to the symbol of political changes that took place after the end of the People’s Republic of Poland period, and to the talks held by the democratic opposition and Church representatives with the authorities of the People’s Republic of Poland in the seat of the Council of Ministers. The round table is a symbolic principle of equality of representatives of all sides. Preservation of this idea within the walls of the Staszic Palace goes beyond the reference to political divisions, and addresses the concept of equality and open dialogue among not only scientific circles, but all those who have an impact on the cultural and intellectual growth of the state. In the the Staszic Palace, display of military accessories and war trophies was of symbolic significance. Nowadays the Round Table Hall, as a place for discussions and scientific meetings, provides space for exchange of ideas, and its name and style remind of the multi-layer strata of meanings inscribed in the area throughout the profuse runs of the palace’s existence.