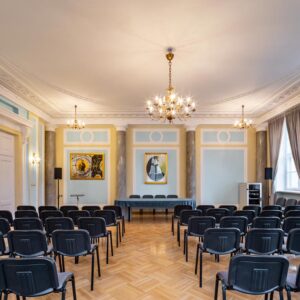 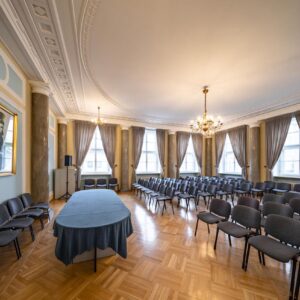 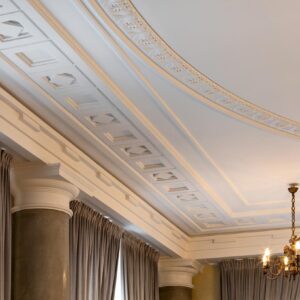 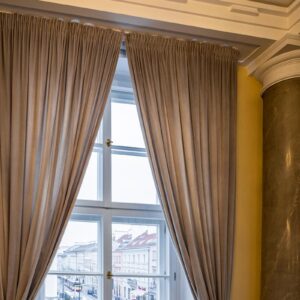 The venue of the Maria Skłodowska-Curie Hall is a post-WWII piece of the palace added to the historical building core. Situated in the south-western part of the structure, the Maria Skłodowska-Curie Hall is one of the two conference rooms that have windows facing Świętokrzyska Street to the south. Although kept in the Corazzian style, the hall incorporates a functional approach to its interior design being a combination of ornamental architectural features and decorative candelabras with contemporary parquet flooring, furniture, and multimedia equipment. The hall does not only provide space for meetings and conferences, but is also used during science promotion events and educational meetings; it seats nearly a hundred people, with ninety seats arranged in a theatrical setting and intended for the audience. Due to its location in the vicinity of the internal staircase, the communication junction can become a buffet area. The event secretariat or a publisher’s stand can also be set up close to the hall.

The view from the window encompasses the intersection of Świętokrzyska and Nowy Świat streets along with the metro station. The post-war western wing of the the Staszic Palace, containing the Maria Skłodowska-Curie hall, runs towards Świętokrzyska Street and lies on the site of demolished tenement houses, formerly adjoining the edifice from the south.

The name Maria Skłodowska-Curie Hall is a tribute and commemoration of the great Polish scientist, and emphasizes the role of exact sciences in the work of scientific institutions. Finally, it represents a step forward and transcends barriers of thought, evident in the adoption of a feminine name and the commemoration of a female scientist with a personal affiliation to the building. Maria Skłodowska-Curie was an honorary member of the Warsaw Scientific Society seated in the palace. Until 1926, she presided over the Mirosław Radiological Laboratory of the Warsaw Scientific Society, and in 1925, she delivered a lecture at the French Institute inside the walls of the the Staszic Palace. The work of the Radiological Laboratory of Warsaw Scientific Society, founded by Maria Skłodowska-Curie, represented a continuation of research work accomplished by scientists directly affiliated with this Nobel Prize winner, and later by their successors. When viewed through the lens of the foundations of the scientific societies housed in the palace, exact science research can be seen as an element of identity-related activities. When addressing the American-Polish community (which financially supported the establishment of the Radium Institute), Maria Skłodowska-Curie stressed that “an independent Poland ought to have [..] its own radium institute”. In the subtle accents in the décor of the Maria Skłodowska-Curie Hall, inspired by Warsaw neoclassicism and commemorating the scientist, there is a portion of intangible heritage, constituting a part of the the Staszic Palace, and the value of the structure; its tangible shape and work within the walls being components of a comprehensive system of both experiential and symbolic dimensions.